Forks Over Knives/Tactical Over Static 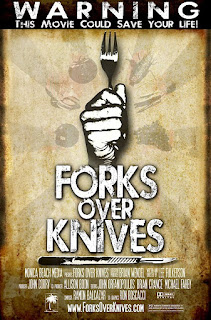 I recently watched a documentary that was very impactful. The film is entitled, Forks Over Knives. It mainly highlights the extensive research of two physicians, Dr. T. Colin Campbell of Cornell University and Dr. Caldwell Esselstyn of the Cleveland Clinic. Both challenge the protocols of traditional western medical treatments. Although the conclusions of both doctors were remarkably consistent, one of the doctors reached his conclusions from a scientific framework, while the other was influenced by his clinical experiences. There is almost a cinematic irony that both doctors were raised in households whose livelihoods were farming, considering the fact that both practically vilify the cattle and dairy industries.

The gist of the film is that the single most important ingredient for good and prolonged health is diet, and one that is based on eating vegetables and other whole foods. Many case studies and patients who were overweight, had high blood pressure, cholesterol, diabetes, and heart damage were featured in the narrative. For over twenty years, Dr. Esselstyn of the Cleveland Clinic has treated patients with extensive heart disease. One of the patients shared that the physician who had treated her prior to Dr. Esselstyn advised her to go home and prepare to die due to the severity of her heart condition. She and several others under Dr. Esselstyn's care are today still thriving some twenty years later. And, what is most remarkable is that the treatment has come in the form of substituting vegetables and whole foods over eating animals. Hence, the title, Forks Over Knives. The title provides a double entendre because consuming foods which can be eaten exclusively with forks might also minimize the likelihood of having to go under the knife.

In further seeking to prove that an animal-free diet yields significant health benefits, the film cited unintended health benefits that resulted when the British were forced to ration meat during World War Two as a result of the Nazis commandeering livestock in Norway. When the Brits were eating much less meat during the war, rates of disease plummeted, only to return to pre-war levels once hostilities ended. Also, eastern cultures have far less incidents of cancer than their western counterparts. The documentary also highlighted more affluent, urbanized areas within China whose diets had evolved to include more animal protein, and there was a direct link with incidents of disease.

Perhaps the conflicts of interests which were revealed in the film most impacted me. Our federal government creates and endorses the food pyramid. In doing so, it encourages us what to eat. And, in doing so, it financially rewards certain food industries. The government subsidizes certain crops such as corn to feed the livestock that Americans eat. Lobbyists for agribusiness control our national food policy. Big business that sells chemicals that are pumped into livestock and poultry are very happy with the status quo. They are not particularly concerned by the fact that some forty percent of Americans are obese or are addicted to fats, salt, sugar, or corn syrup. They also influence what foods find their ways into public school cafeterias. There are also biases from medical professionals. There are some 500,000 bypass surgeries in the US every year. Few physicians prescribe nutrition over pills or procedures.

All of this got me thinking about the biases and self-interests within the world of investments. I have never met a stock broker who articulated that this might not be the best time to buy stocks. I have observed that very few brokers actually have a plan to navigate markets on a proactive basis. If they did, investors may not routinely experience big losses during market downturns such as in 2001 and 2008. Instead of actually taking responsibility for navigating markets, a great number of investment brokers simply load a client into a pre-fabricated, computer-generated static investment model. The problem is that the model is based on reasonable allocations for a time frame of eighty to one hundred years. It does not distinguish between market conditions of say 2007 when performance soared or 2008 when everything crashed.

Brokers have justified their use of static models by trying to convince the public that no one can effectively navigate the market. They say things like, "It's time in the market, not timing the market." They encourage investors to stick with their models even when things are seriously moving south. They routinely show charts showing the effects of missing out on the ten best trading days, but they conveniently neglect to show the impact of avoiding the ten worst trading days. They rely on the computer to allocate and rebalance, and they remove themselves and current conditions from the decision making process. I understand this. By limiting human interaction and decision making, they limit liability. Investing with a cookie-cutter framework definitely leads to greater scalability. My premise is that the computer serves as the financial advisor in this scenario, not the financial advisor. Computers offer precision, but they rarely can account for subtle market trends, which can be crucial to recognize. Tactical investing involves the art of navigating allocations based on indicators that the market is providing in real time, and responding in an agile and nimble way. Tactical investing is not about forecasting where the market may move, but rather navigating based on objective signals that it objectively presents.

I believe in being tactical. And, I am outside the norm of the investment Establishment. Just as you might think modifying your diet might be too simple a remedy for good health, especially when The Establishment promotes otherwise, you might similarly question whether a tactical investment approach could be more prosperous than a static approach. I always say that if what you are doing is working, then stick with it. The reality is that today's youth is on a path to be the first generation not to outlive its parents, according to Alliance for a Healthier Generation. Additionally, I believe that today's youth is the first to most likely accumulate less real net worth than its immediately preceding generation. Sometimes, the most simple solutions are the most difficult to comprehend. After all, we ask ourselves, "Could it really be that easy?" I think it can!

Changing your diet to include more whole foods might augment the entire course of your life. Similarly, the right investment strategist might also enhance your prospects for a life of meaning, purpose, and happiness. And, that is at the core of our mission statement.


No strategy assures success or guarantees against a loss. Tactical investing may involve more frequent buying and selling of assets and will tend to general higher transaction costs. Investors should consider the tax consequences of moving positions more frequently. The opinions voiced in this material are for general information and are not intended to provide specific advice or recommendations for any individual. To determine which investment(s) may be appropriate for you, you should consult a financial advisor prior to investing. Past performance is no guarantee of future results.
Posted by Gann Partnership, LLC at 11:40 AM

At Gann Partnership, we have two separate and distinct, yet
uniquely complementary functions. In one of these functions, through LPL Financial we provide objective, unbiased financial planning and active investment management for individuals, families, and businesses. We do not believe in the ubiquitous, yet simplistic asset allocation pie chart models that do not address risks and opportunities that exist in real time. We do not ascribe to a simple buy and hold (otherwise known as buy and hope) approach. We believe that true diversification incorporates assets and strategies beyond long-only stock and bond investing. And, we believe that different market conditions demand different strategies and types of investments. We take great pride in our research and our record of delivering investment products and strategies for which only few have ever been previously
educated or exposed.

In our other capacity, we leverage and combine our financial planning, tax and estate planning as well as active investment management knowledge and experience to serve as a certified divorce financial analyst. In this capacity, we are guided
by the principle that even if marriage is not forever, family is. How a couple handles this most challenging chapter of its life will have a direct and permanent impact on the family unit. And, since separation and divorce are all about family preservation, finances, and division of property, a team-oriented approach that incorporates financial planning specifically as it relates to issues surrounding separation and divorce helps to assure the most favorable
outcome for all parties.

Gann Partnership, LLC
Baltimore, Maryland
Greg is a: • Member of the Maryland Bar • Certified Divorce Financial Analyst • Certified and active in collaborative law as well as mediation • Owner since 1989 of his own investment advisory and financial planning firm, affiliated and offering securities through LPL Financial, one of the largest registered investment advisors in the United States. Greg Gann brings an unparalleled combination of skills and experience in divorce financial analysis and mediation. His expertise and perspectives are highly sought after by ancillary divorce professionals, and he is an advocate for a collaborative, team-oriented approach to resolving family issues. 3 Church Lane Baltimore, MD 21208 (410) 415-5505 Fax:(410)415-5503 Toll Free: 1-877-415-5505 gregory.gann@gannpartnership.com Securities and Financial Planning offered through LPL Financial, member FINRA/SIPC.

For Email Marketing you can trust